The Last Colony: 40 Years is Enough

2015 marks the fortieth year of Morocco's occupation of Western Sahara. SAIH "celebrates" the anniversary by drawing attention to the human rights violations in the occupied territories and the need for change. 40 years is enough! 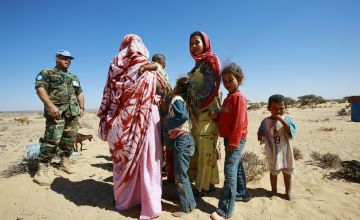 Have you heard about Africa's last colony, Western Sahara? The answer is probably no. And the reason for that is that the occupying forces of Morocco have achieved what other occupiers have not.

The people of Western Sahara who demonstrate against the occupation are tortured, imprisoned or just disappear. From an imperialistic point of view, this is totally genius. Morocco sets a new standard for this old, proud and almost totally forgotten tradition. From every other point of view, the consequences are tragic and brutal.

40 years of occupation is enough. Therefore we demand that human rights violations in Western Sahara must cease and that Sahrawi's right to self-determination is guaranteed.

Demands of the campaign

1) The Referendum must take place!

The UN peacekeeping force in Western Sahara is the only UN force created after 1970 without a mandate to implement permanent human rights monitoring. Every year when the mandate is under consideration in the Security Council France, which has close relations with Morocco, uses its position to stop the inclusion of permanent human rights monitoring. On April 30th 2015 the mandate is up for consideration again. It is urgent; the international community must put pressure on the French authorities so that they don't sabotage the human rights of the Sahrawi people this year as well.

Norwegian authorities discourage business in Western Sahara that violates international law. SAIH demands that the colleges and universities in Norway follow this recommendation when considering cooperation with companies engaged in controversial activities in Western Sahara.